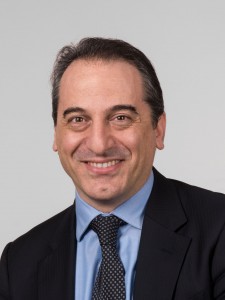 Professor Francesco Rubino, is Chair of Metabolic and Bariatric Surgery at King’s College

London. He has held this position since October 2013.

In 2004, a study by Prof Rubino provided for the first time experimental evidence that the antidiabetes effect of certain bariatric procedures, particularly gastric bypass surgery, results from mechanisms beyond weight loss. This evidence offered a scientific rationale for surgical treatment of type 2 diabetes, including in less obese patients. Professor Rubino’s research findings and theories also points to a role of the gastrointestinal tract in the pathophysiology of diabetes and obesity.

Professor Rubino received his MD and completed his residency in general surgery at the Catholic University / Policlinico Gemelli in Rome, Italy. He completed fellowships in laparoscopic surgery at the European Institute of Telesurgery in Strasbourg, France; Mount Sinai Medical Center, New York; and Cleveland Clinic in Ohio.

A member of many professional organizations, Professor Rubino is the recipient of numerous awards, has given hundreds of presentations throughout the world and is the author of over 100 articles in peer-reviewed journals and book chapters. He was one of the co-organizers of the landmark Diabetes Surgery Summit in Rome in 2007 – an influential scientific event where leading international authorities for the first time reached a consensus on the best candidates for the surgical treatment of diabetes. Professor Rubino also served as Congress Director and organized the 1st and 2nd World Congress on Interventional Therapies for Type 2 Diabetes in New York City, bringing together over 1,000 multidisciplinary diabetes experts from 62 countries.

For several consecutive years, Professor Rubino has been selected by both US News & World Report and Castle Connolly as one of “America’s Top Doctors” and was selected by Crain’s NY Business as a notable “40 under 40”, which recognizes young rising stars in the healthcare, business, non-profit and entertainment industries.