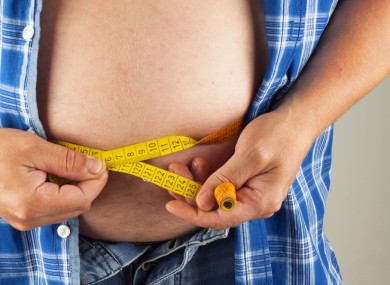 “The funding for more surgery just isn’t there. But there is the need and we’ve identified the need.”

IRELAND IS CARRYING out less than one weight loss surgery a week, despite 92,500 adults qualifying for it.

That is the finding of a study from the ESPRIT (Evidence to Support Prevention, Implementation and Translation) research group led by Professor Patricia Kearney at the Department of Epidemiology and Public Health, University College Cork (UCC).

The data collected by the researchers estimates that current weight loss, or bariatric, surgery provision in Ireland meets less than 0.1% of the need.

The study, published in the journal Surgery of Obesity and Related Disorders, estimates the number of older Irish adults who are potentially eligible for and likely to benefit from weight loss surgery. It calls for a strategy to develop and expand the provision of bariatric care.

Kate O’Neill from the Department of Epidemiology and Public Health in UCC toldTheJournal.ie that bariatric surgery is more cost effective than treating many obesity-related conditions and puts less strain on the health service.

“Evidence suggests the surgeries work, particularly for people with the likes of Type 2 diabetes. We worked out that we’re carrying out one bariatric surgery per 100,000 people here. In France they carry out 57 per 100,000 head of population.”

O’Neill says that a combination of a lack of facilities and funding means surgery numbers are low. In Ireland, just two public bariatric centres exist, carrying out 50 surgeries a year.

The funding for more surgery just isn’t there. But there is the need and we’ve identified the need.

The findings of the study show that 7.97% of older Irish adults are potentially eligible for bariatric surgery according to recent guidelines. This represents around 92,500 adults in Ireland.

Dr Francis Finucane, consultant in endocrinology at Galway University Hospital, says that the surgery is a necessary intervention.

“It is important that this intervention becomes an accessible treatment option for those in greatest need.