European Obesity Day 2017 will be held on Saturday 20 May. It brings together healthcare, patient and political communities who are keen to raise awareness of obesity and the many other diseases on which it impacts. The theme for EOD 2017 is Tackling Obesity Together. 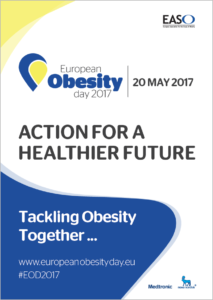 is to increase knowledge and understanding of the need for action at both European and national levels to improve prevention, treatment and care. At the same time, the campaign supports European citizens who are overweight or have obesity to make lifestyle changes to manage their weight and improve their overall health and quality of life.

Although European Obesity Day is a recognised international awareness day, the activities and initiatives that take place around it are just as important. These include events held at local, national and international level held in the lead up to EOD and many which will continue afterwards, please see press release related to EOD 2016.

The story behind European Obesity Day

The first European Obesity Day (EOD) was held in May 2010. What started as a grass-roots campaign involving a small group of concerned doctors and patients, quickly turned into a major event with participants and activities across many European countries.

Events have ranged from picnics and information stands in Paris, to walks and fun runs; briefings for healthcare professionals and pharmacists; the free distribution of fresh fruit and vegetables; debates and workshops for politicians and policymakers; media briefings and press conferences; and the free use of city bikes for the day. A more detailed list of some of the activities appears here.

In 2010 EOD received the award for ‘Campaign of the Year’ at the European Public Affairs Awards.

The importance of European Obesity Day

European Obesity Day is an important opportunity to raise awareness about obesity.

For EOD 2017 we will be highlighting the need for obesity to be more widely recognised by the European Union and member state governments as a chronic disease and to draw attention to the benefits this will bring to both individuals and to healthcare systems. Obesity is recognised as a chronic disease that requires long-term management by health organisations such as WHO [1], The Organisation for Economic Co-operation and Development (OECD) [2], The American Medical Association (AMA) [3] and the Canadian Medical Association (CMA) [4].

Recognition of obesity as a chronic disease by European Member States will result in greater access to care and treatment for those who are overweight or who have obesity. [5] [6]

At the same time, the campaign supports the broader initiatives of EASO, and national associations and collaborating centres, to encourage European citizens who are overweight or who have obesity to make the necessary changes to manage their weight and improve their overall health and quality of life.

Who is behind European Obesity Day

European Obesity Day is a campaign platform of the European Association for the Study of Obesity (EASO).

Established in 1986, EASO is a federation of professional membership associations from 32 European countries. It is the voice of the European obesity community, representing scientists, health care practitioners, physicians, public health experts and patients. EASO is in formal relations with the World Health Organisation (WHO) Regional Office for Europe and is a founding member of the EU Platform on Diet, Physical Activity and Health.

EASO promotes action through collaboration: in advocacy, communication, education and research. EASO facilitates and engages in actions that prevent and combat the epidemic of obesity. It contributes to high level European and National scientific consultations, hosts the annual European Congress on Obesity (ECO), has dynamic and active topic specific Task Forces and Working Groups, and coordinates obesity education across Europe. EASO’s mission is to reduce the burden of unhealthy weight.

It is enabled with the support of Medtronic and Novo Nordisk.