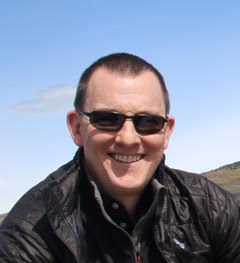 Dr Graham Turner works as a Consultant Gastroenterologist for the Belfast Heath and Social Care Trust at both the Royal Victoria and Belfast City Hospitals. He is  Clinical Lead for Gastroenterology and Endoscopy at the Trust where he works with 12 other luminal gastroenterologists and 4 hepatologists. He has been a consultant since 2006 initially in Altnagelvin Hospital in Derry but moved to Belfast in 2009 where he took on medical lead for the Intestinal failure Team from Mr Keith Gardiner. He and his colleague Dr Gerard Rafferty (who is now the lead for the IF team) look after around 150 patients from Northern Ireland with Intestinal Failure and Intestinal Insufficiency. His surgical colleagues are Mr William Wallace and Mr Richard Arnold.

Graham qualified from Queen’s University Belfast in 1996 and completed his training in Northern Ireland. He wrote an MD thesis on Neuroendocrine Tumours at QUB being awarded MD in 2004. He then did a year Fellowship in Perth Australia where he developed an interest in Intestinal Failure and Nutrition and then completed a 6 month Fellowship as Senior Clinical Nutrition Fellow at University College Hospital in London with Prof Alastair Forbes.

A national programme for Intestinal Failure: bridging the North-South divide?

An intestinal failure service was established in Belfast in 1996 by Professor Keith Gardiner starting with one Nutrition Nurse, one dietitian and one pharmacist. They did a once weekly ward round and had a small number of HPN patients at inception.

Since then the numbers have grown and, over those 20years, the team has managed a total of 100 patients on Home Parenteral Nutrition. There are now two consultant gastroenterologists, a specialty doctor and a rotating training nutrition registrar. There are two colorectal surgeons with a sub-speciality interest in IF. The Nursing team now comprises 5 full-time equivalent (FTE) Nutrition Nurse Specialists and 4 FTE dietitians with an interest in IF. The team has support from a 0.5 FTE Clinical Psychologist and has excellent support from the interventional radiologists at the Belfast City Hospital. There are daily ward rounds and a weekly multi-disciplinary IF clinic along with 2 separate weekly MDM’s for inpatients and outpatients. In addition to the core work of managing type 2 and 3 intestinal failure, the team also manages all patients on parenteral nutrition and advises other medical teams assisting with enteral nutrition, particularly for complex cases.

The development of this service has been a gradual and stepwise process. Funding has been slowly introduced to these levels with a very significant recent investment from the Commissioners in 2015. Dr Turner will talk through the history of the development of the team in Belfast and draw parallels with the service being proposed in the South. The aim of his talk will be to inform of the hurdles the team in Belfast faced and continue to face with their service and then hopefully open discussion with colleagues about lessons that can be applied to the development of a formal and potentially centralised IF service commissioned by the HSE.