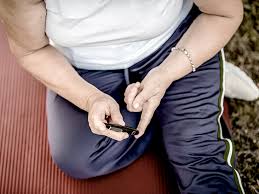 A study on a new diabetes drug has found that it can help to reduce weight by up to four stone in 40% of patients with obesity.

Obesity affects more than a million people in Ireland and is one of the major causes of cancer, heart attacks and a reduction in quality of life.

The European Association for the Study of Diabetes (EASD) is this Wednesday presenting a symposium on tirzepatide – a new diabetes medication taken once weekly by injection.

Tirzepatide is also known to enable patients to lose substantial amounts of weight.

To quantify its impact on weight loss, Irish Society of Nutrition and Metabolism (IrSPEN) member and St Vincent’s University Hospital Obesity Specialist Professor Carel le Roux is presenting the findings of a trial of the medication in patients without diabetes.

The trial included two and half thousand patients with obesity who received either a placebo or once-weekly injections of tirzepatide (5mg, 10mg, or 15mg) for 18 months. Patients weighed 16 stone at the start of the study.

These outcomes also greatly improved patient’s risk factors for heart disease. Side effects were mild or moderate and included nausea, diarrhoea or constipation.

Professor le Roux said: “This 72-week trial in people with obesity showed that tirzepatide provides significant and sustained reductions in body weight and all indications are that the health gain is substantial.”

IrSPEN member and specialist in obesity GP Dr Mick Crotty said: “Obesity and diabetes are chronic diseases that need to be treated long-term. With new medications such as tirzepatide people can manage these diseases and gain health.”

Irish Coalition for People living with Obesity (ICPO) spokesperson Susie Birney said that “new medications for diabetes and obesity give hope to people living with these conditions – and more and more it is being understood that these chronic diseases are not their fault. Patients are eager to take responsibility together with their doctors and control their diseases in the long term.”

Eli Lilly has obtained permission for tirzepatide to be used for patients with diabetes in the USA and has also received a favourable opinion from the European Medicines Agency. Final approval for use with patients in Ireland and other EU countries is awaited, but expected in the near future.

Obesity is the major contributing factor to type 2 diabetes which affects 200,000 people. Treatment for type 2 diabetes alone accounts for more than 10% of the overall healthcare budget.

Irish Coalition for People living with Obesity (ICPO) is a patient led non-profit organisation who aim to educate, raise awareness and support people living with overweight or obesity across Ireland. www.icpobesity.org

The European Association for Study of Diabetes (EASD) is a non-profit, medical scientific association. Founded in 1965 it aims to encourage and support research in the field of diabetes, the rapid diffusion of acquired knowledge and to facilitate its application.