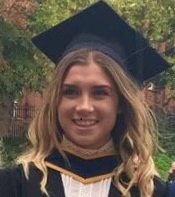 Last year Niamh graduated from Dublin Institute of Technology and Trinity College Dublin after completing a four year BSc (Hons) in Human Nutrition & Dietetics. During her final year of study she was required to carry out a research project in the field of advanced cancer. She used both subjective and objective measures to investigate the prevalence, severity and characteristics of taste and smell abnormalities in an advanced cancer, hospice population. Explored the relationship between taste and smell abnormalities and malnutrition risk. Overall, she found the project challenging yet highly rewarding. Niamh received the IrSPEN Award for the best final year project in the BSc Human Nutrition & Dietetics course 2017.

Since completing the project in May 2017 her work has been presented at the 7th International Seminar of the European Palliative Care Research Centre and the EAPC Research Network. She also presented the findings at a national level at the recent Irish Association for Palliative Care Research Seminar in February. At present Niamh am working as a clinical dietitian while concurrently endeavouring to publish her final year research project in the coming months.